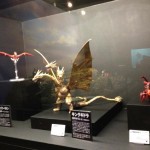 Among AmiAmi’s twitter coverage of the Bandai Tamashii Nation 2011 event was the announcement and images of an SH Monster Art King Ghidorah!

On top of that, Godzilla’s 3 headed rival was also pictured alongside Rodan and Destoroyah (aggregate form). All 3 will likely be released next year, but we’ll keep you updated when exactly when are how much are known.