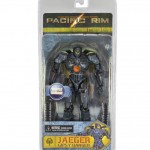 Thanks to our sister site The Toyark for the heads up on the latest Pacific Rim merchandise images:
NECA Pacific Rim 7″ Figures Series 2


These NECA figures are due out in October

Striker Eureka, the strongest and fastest mech on the planet, is the world’s only MARK V Jaeger. Piloted by father and son team Herc and Chuck Hansen, the Skyscraping Soldier is equipped with deadly Sting-Blades capable of cutting through bone and buildings with ease. Australia’s pride and joy is constructed of expertly crafted armor and finished with a detailed paint deco and brilliant red and blue light-up features. Developed in partnership with award-winning filmmaker Guillermo Del Toro, the Sideshow Collectibles Striker Eureka statue brings this brutal brawler from the big screen to your collection.