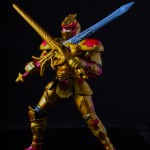 Did you know that 2013 actually marked the 15th anniversary of the very awesome Mystic Knights of Tir Na Nog? Well Photo & Content contributor conundrum is certainly here to remind us with this gallery of the Mystic Knight of Fire, Rohan!

Mystic Knights was a rare breed of tokusatsu indeed. An American/Irish co-production created by Saban Entertainment based loosely on Irish myths and aimed at the same audience that watched such shows as Mighty Morphin’ Power Rangers and Masked Rider. The show itself only lasted a single 50 episode season as it’s second season budget was instead allocated to Power Rangers Lost Galaxy. The show however is still special for many fans because of it’s unique take on the genre and the toyline itself is really pretty great and still affordable to collect even now.

Check out conundrum’s full selection of images by clicking this link or “Discuss on the TokuNation forums” at the bottom of this post! We’ll be bringing you at least a couple more Mystic Knights galleries this month, and next up will be the Mystic Knight of Air, Deirdre!