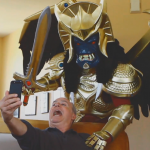 For those who don’t know the very humble Kerrigan Mehan is the legendary voice behind Mighty Morphin Power Rangers flying ape of doom, Goldar! Astute fans may also know him as the voice of the original Magna Defender from Power Rangers Lost galaxy AND Jeb the dog from VR Troopers!

Well today Mr Mehan took some time out of his busy convention schedule, including a recent appearance at the Lexington Comic & toy Con, to share a video simply titled Goldar & Me. This fun video shows Mr Mehan and “Goldar” hanging out at home as well as sending out a challenge, to the original Red Ranger! Austin St. John will be making a return to the fandom and convention circuit with Florida Supercon after being over seas for some time, and it looks like Goldar is ready for a rematch!