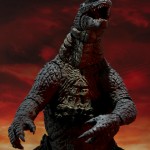 The Bandai Tamashii Nations website has uploaded full galleries of its forthcoming September releases, and kicking things off is S.H. MonsterArts Godzilla (2014), based off of the King of Monsters’ appearance in the brand new Godzilla film from Legendary Pictures.

Stomping in for a price of 7344 yen, according to his official page Godzilla sadly features no additional accessories. While he is scheduled for a September release in Japan, Bluefin Tamashii Nations will likely follow with an October release in the US. We’ll keep you updated when this is confirmed.

In the meantime, check out the official images after the jump!