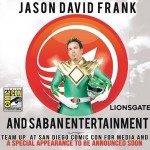 The folks who have been bringing you the classic Power Rangers to DVD as well as the amazing Legendary Power Rangers DVD Collection, Shout! Factory, will be at this year’s San Diego Comic Con. They’ve sent out a press release with details of their schedule and special guest appearances. The details are as follows!

Also be sure to follow our coverage team – from TokuNation.com and the Talkin Toku Podcast, “Kickback” @rankal on Twitter, “Den-O” @DenO_TokuNation on Twitter, and our good buddy “Deefuzz” @Deefuzz on Twitter. We have a TON of surprises in store for everyone and our coverage this year will be even bigger than our coverage last year. We’ll see you at the show! (We will be there in 8 days!)