TFW2005HisstankTokuNationToyark
Tokunation › Godzilla › Godzilla 2 and Other Monsters announced at SDCC!! 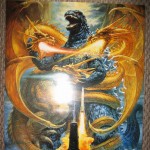