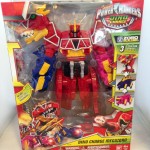 One of the most anticipated figures to be released since Power Rangers Super Megaforce released this time last year, the Power Rangers Dino Charge Megazord has been found at various Toys’R’Us stores in the midwest of the United States! And thanks to our good friend trekkieb47, we have an extensive first look, in-hand image gallery to bring you of this figure.

The first thing you will notice – Triceratops is pink! And not just kind-of pink. We’re talking full on “bubblegum” pink. That’s a win for the fans – and a special thanks to Bandai of America for listening to the fans on this one. You also receive a clear Red Ranger Dino Charger – and only one. You do not receive a Dino Charger for the Stego or Tricera zords. But why let me tell you? Trekkieb47 has that covered! Check out his unboxing video below!

If you’ve found new toys – tell us! Tell your fellow collectors! Post your sighting in our state-by-state Sightings forum! Don’t forget you can also tweet us your finding @TokuNation on Twitter and we’ll retweet it to the rest of Ranger Nation!

What are your thoughts? Share them! And of course … HAPPY HUNTING!!!