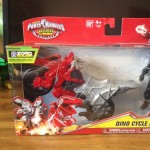 The hits just keep coming this weekend! Power Rangers Dino Charge products continue to trickle out to retail and as they do more and more of our users are finding them. Today our very own GoseiWonder has come upon the Dino Charge Dino Cycle with Black Ranger figure!

Found at the St Cloud MN Toys R Us location, the Dino Cycle is Power Rangers Dino Charge’s interpretation of the Deinochaser motorcycle from Zyuden Sentai Kyoryuger. The example found here is a red/silver variation of the standard yellow/black Dino Cycle and comes packed with the Dino Charge Black Ranger 4″ figure. A standard yellow/black Dino Cycle with Red Ranger is also currently hitting retail as is a silver/black variant including a Blue Ranger.

Contrary to popular belief the Dino Cycle indeed splits into it’s two dino zord components though not in the same way as it’s Japanese counterpart. It does however feature Zord Builder ports making it compatible with the other zords in the Dino Charge toyline. Check out 20 images after the jump of this set and look below for a quick  & dirty un-boxing video from GoseiWonder as well!

Check back with us later in the week for an in depth Hi-res gallery of the Dino Cycle set as well! As more Dino Charge product hits retail we’ll be covering every piece of it!

If you’ve found new toys – tell us! Tell your fellow collectors! Post your sighting in our state-by-state Sightings forum! Don’t forget you can also tweet us your findings @TokuNation on Twitter and we’ll retweet it to the rest of Ranger Nation!

Get charged up and let the hunt continue!