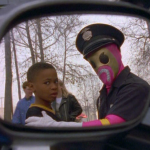 TokuNation’s weekly viewing segment returns with another installment of Power Rangers In Space!

After last weeks shell shocking crossover the rangers are back to fighting Astronema’s forces on their own. But as Andros tries to adjust to life as the other rangers have always known it, he’ll have an encounter or two with the unfamiliar concepts of greed & deceit. Meanwhile Bulk & Skull continue to get into high tech hijinks with the professor. Hijinks Astronema herself has taken an interest in, that can’t be good. And finally with Simudeck malfunctioning in an epic way Craterites have been unleashed on Angel Grove! It looks like these creepy creations intend to body snatch all the people in the city!

Rocket Powered Reading #3
Since they’ve been brought up this week let’s talk Craterites! These odd foes of the rangers are normally just simulations produced for training purposes, but this week sees a Simudeck malfunction bring them into reality en mass. However in the Denji Sentai Megaranger footage used to create the series these creatures, the Kunekune, were front and center as the primary footsoldiers of the Nezirejia Kingdom!

The Kunekune were deemed a bit too silly and generic to be used for the Power Rangers adaptation of Megaranger. So in much the same way the previous years villains from Carranger, the Wumpers, were dropped in favor of the Saban developed Piranhatons, the Kunekune were dropped in favor of the robotic Quantrons. Though the Kunekune made it into the show as Simudec foes nearly all footage aside from this pertaining to them was removed from In Space.