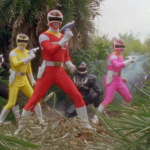 Let’s rocket into another week of Power Rangers In Space on Let’s Watch Wednesdays!

The Phantom Ranger has returned! On a quest to save Zordon from the clutches of Dark Specter, Phantom Ranger has encountered Divatox’s forces! Sending a distress message to the Space Rangers the Phantom has discovered Zordon’s location. Unable to rescue Zordon himself and badly injured, Phantom Ranger now holds the key to an even greater power for the rangers. The Delta Megaship! And the rangers have a couple other problems on their hands too! If it’s not Sting King & Waspicable, then it’s another of the Professor crazy inventions, the Evilyzer! Facing a horde of Astronema’s monsters it’s time to call on the power of the Astro Delta Megazord!

This week sees the introduction of an incredible piece of Power Rangers history & technology as well. Brief though it was, Episode 10 of Power Rangers In Space “The Delta Discovery”, not only saw the rangers receive the power of the Delta Megazord, but also the device used to control it. The Battlizer!

Battlizer of course refers to the numerous devices used throughout the Power Rangers franchise which have allowed various rangers (mostly Reds) to access a Battlized mode. Though we’ll see exactly how important this item is specifically to In Space in later episodes it’s legacy is unforgettable. Often a term more associated with the specific power ups/armors certain rangers have received over the years, Battlizer in this case references the device worn by Andros. Though it would later allow him access to his own Battlized Mode as well.