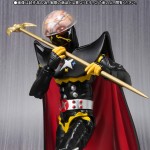 As we mentioned earlier today, Gil Hakaider is the form that Professor Gil (the leader of the DARK & SHADOW organizations) assumed in Kikaider 01. His brain was implanted by a group of scientists into the lifeless Hakaider’s body. This version of the figure differentiates itself from the initial Hakaider with some slight paint app differences, and the addition of his cloak & Gil Whistle staff! The Hakaider Shot from the previous release is also still included along with the replacement shin/holster for it.

S.H. Figuarts Gil Hakaider will be released as a Tamashii Web Exclusive in May 2015 for 5184 yen.