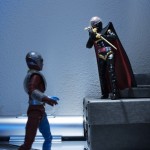 Well ahead of it’s April release via the Tamashii Web Shop we’ve gotten an early in hand look at S.H. Figuarts Kikaider 01! As usual this type of early look is courtesy of Tamashii Nations themselves and it gives us a glimpse at what the finalized figure will look like, and the accessories it will have.

However, these images also drop a huge bomb. The reveal of S.H. Figuarts Gil Hakaider! Fans of the Kikaider franchise will undoubtedly recognize the emperor of the DARK & SHADOW terrorist organizations as he appeared in Kikaider 01. Gil comes with what every evil emperor needs, a flowing cape and his trademark staff! No release details are known for Gil Hakaider yet but stay tuned as we find out more about this surprise reveal!