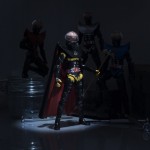 1972’s classic tokusatsu franchise Kikaider has been getting a lot of love lately, and it looks like it’s potentially getting 3 more doses of it soon! With S.H. Figuarts Kikaider 01 & Gil Hakaider about to be released is it’s no surprise that Bandai has chosen today to tease the release of the S.H. Figuarts Hakaider Squad!

The Hakaider Squad from Kikaider 01 is composed of 3 similar Hakaider model cyborgs, each with a different color designation; Red Blue & Silver. Created from the remains of other DARK scientists these 3 in addition to Gil Hakaider formed the Squad. In the 01 TV series each had their own unique monster form, as well as the ability to combine into one gigantic cyborg known as Gattaider.

With possibly 3 more Hakaider’s coming from Bandai (a 3-pack perhaps?) we wonder what next era in the Kikaider franchise Bandai will spotlight. We’ll keep you informed as more updates become available!