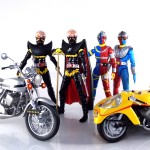 The long wait is over! With SDCC News and updates out of the way it’s time for TokuNation to return to it’s regularly scheduled programming of new toy galleries! First up on the chopping block our long overdue look at the villain of the classic tokusatsu series Kikaider 01. The evil mastermind behind SHADOW, it’s S.H. Figuarts Gill Hakaider! Gill Hakaider is of course the second character to bear the Hakaider name. A new version of the cyborg created using the evil Professor Gill’s own brain, this creature would be the arch nemesis of Kikaider’s older brother Kikaider 01!

In figure form Gill Hakaider is very similar to the previously released Hakaider with a few key differences. Primarily newly painted face details as well as the Hakaider emblem emblazoned on his chest. Though the biggest differences would the inclusion of Gill’s mechanical mind controlling flute staff as well as his cape! Though the cape is more generally associated with his anime counterpart, it’s an incredibly cool bonus to get here.

While we’ve attached a selection of images to this post, check out over 50 images of S.H. Figuarts Gill Hakaider included several with his namesake Hakaider as well as the Kikaider brothers after the jump. We’ll revisit the Kikaider world again in the coming months with a gallery of Kikaider 01’s Double Machine!