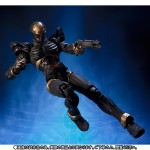 Initially revealed way back in May at Tamashii Nations Summer Collection, the Tamashii Web Shop has just thrown up an official order page for S.I.C. Hakaider!

A companion piece to the S.I.C. Kikaider being released in October, this version of Hakaider seems to take after his Mechanical Violator incarnation. Hakaider looks to include 1 sets of additional hands, a swap out chest plate, and his Hakaider Shot handgun. S.I.C. Hakaider will be released as a Tamashii Web Exclusive in February 2016 for 7344 yen.

Be sure to contact your favorite middleman service today to order S.I.C. Hakaider!