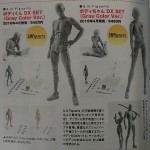 People have asked for years about the generic bodied figures that Tamashii Nations has used in displays at various conventions. Well it looks like they need ask no more, as it appears a version of these figures will be made available to the general public!

The S.H. Figuarts Blank Bodies are just what the name implies. Blank slates with a full range of articulation and a wealth of accessories. These will be perfect bases for customizes to produce just about any male or female figure they choose. They even come in two different color options. The S.H. Figuarts Blank Bodies will be released in 4 varieties:

The DX sets in Gray will come with a plethora of accessories including 17 hands, a kitana, and even a unique Tamashii stage storage case. Meanwhile the Pale Orange sets will be cheaper and feature fewer accessories, each version only coming with 8 hands.

For those ambitious enough out there, and with the right skills, it looks like the gaps in your S.H. Figuarts collections may finally be filled with a little hard work!