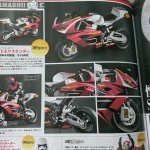 Recently on display at the Tamashii Nations 2015 fall event, we now have confirmed release details for the S.H. Figuarts Kabuto Extender!

A follow up release for last years’ Shinkochu Seihou Kamen Rider Kabuto, the Kabuto Extender is looking sharp. The original Kamen Rider Kabuto figuart was on the market for a number of years without a bike so it’s nice to see the redo finally getting his ride. No accessories are confirmed at the time of this writing but its like the Kabuto Extender will include at least a wheel base, it will obviously be non-transforming as well.