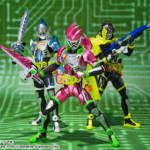 That was certainly a quick turn around. Only today were we provided with our first looks at any of these figures. Now the Tamashii Nations website has officially opened it’s Ex-Aid section for public viewing giving us our first official images & release info for:

These figures will be made available in a special 3-pack called the Kamen Rider Ex-Aid Mighty Action X Beginning Set. As a bonus, a repaint of the 1st run bonus Gaim beat riders stage is included decked out with the Mighty Action X game logo. This massive 3-pack is confirmed for release in March 2017 for a whopping 15, 768 yen. The best news though is that this 3-pack is going to be a retail release!