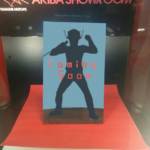 Redman. The often forgotten violent step-child of the Ultra family looks to finally be receiving a figure of some kind. At it’s currently ongoing Tamashii Nations 2016 event Bandai has just release a teaser silhouette of a Redman figure. We can only assume that it will be an S.H. Figuart given that’s the trend with Ultraman characters.

For a little clarification, if you don’t know Redman, here’s the scoop. Redman starred in a short mini-series from 1972 comprised of 138 5-minute long episodes and was primarily known for rather violently executing his enemies. Kaiju which were culled from Ultraman productions to cut costs. It seems that this figure is being made largely in part thanks to Tsuburaya streaming the entire series on it’s youtube channel recently.

As more information becomes available about the Redman figure this weekend we’ll update this story. Stay tuned to TokuNation for all of your Tamashii Nations 2016 updates!