CLASSIC 1/50 SCALE BATCAVE DESKTOP SCULPTURE
Batman’s sanctuary, his base of operations, the nerve center of his activities was a mysterious subterranean lair that was equal-parts forbidding and exciting! This 1/50 scale classic Batman TV series Batcave was a riot of color featuring a unique 1960’s aesthetic. Each model contains more than 16 different LED lights in a variety of hues, both fixed and animated, that bring the Batcave to life.
$799.99 Preorder

JOKER FACE OF INSANITY BUST
This life-size bust is meticulously sculpted to capture every detail of the Joker’s madness, from the furrow of his focused brow to creases formed by his signature smile. The piece is made of resin with a metal mask stand and card-themed base, holding the frightening face aloft.
$349.99 Preorder

BATMAN VS BANE 1/6 SCALE DIORAMA
Iron Studios is proud to present the Batman vs Bane Battle 1/6 scale diorama. This limited edition diorama is crafted from polystone and is based on concept art by official DC Comics artist Ivan Reis. Standing approximately 22 inches tall, the hand-painted diorama features an epic battle between Pena Duro, also known as Bane, one of Batman’s most dangerous adversaries, and The Dark Knight.
$649.99 Preorder

ARKHAM KNIGHT 1/10 RIDDLER ART STATUE
This limited edition hand painted polystone statue of The Riddler stands almost 8 inches tall and is based on original 3D references from the game.
$104.99 Preorder

MTCD-03 SP THUNDER EREBUS
Thunder Erebus, part of the Cross Dimension line, is a transforming figure changing from robot to big rig with trailer. Thunder Erebus comes armed with an array of blasters and includes a mini figure companion.
$99.99 Preorder

MTRM-10 GALAXY METEOR
Galaxy Meteor, part of the Re:master line, is a transforming figure changing from robot to futuristic jet. Galaxy Meteor comes armed with a blaster rifle and two sabers that can be used in both robot and vehicle mode.
$139.99 Preorder

D-12 GABRIEL
The D-12 Gabriel figure stands at impressive 22.25 inches tall from head to toe and 23.75 inches to the tip of his wings. Gabriel transforms to a large base made up of a large track surrounding a missile launch station and patrol tank. This figure is made of die-cast and ABS materials and features LED lights in the hand cannons.
$279.99 Preorder

TMNT FULL SIZE LEONARDO FIGURE
This actual-size Leonardo replica figure is based on the classic TV cartoon series and stands nearly 5 feet tall! Leo is made of hand-painted foam rubber and latex and is authentically detailed, down to the katana holder on the back of his belt.
$499.99 Preorder

TW-M07C SPACERACER
TW-M07C Spaceracer stands about 4.50 inches (11.43cm) tall and transforms into a U.F.O. space craft. He is armed with a pair of wrist rockets which can also be deployed in ship mode. He comes with a display base and stand to display him in flight mode.
$54.99 Preorder

TOYWORLD DINO COMBINER (METALLIC)
ToyWorld presents the complete set of 5 transforming dinosaurs in a limited run metallic paint deco! Each of these figures work as stand-alone pieces transforming from robot to dino forms and they are also able to combine to form a giant robot figure.
$399.99 Preorder

BATMAN: THE ANIMATED SERIES COLLECTIBLES
From the hit classic Batman: The Animated Series comes new collectible figures, statues, vehicles, and more! Each iconic villain and hero features the stylized designs from The Animated Series that fans love and need in their collections!
New Arrival

STAR WARS: THE BLACK SERIES LIGHTSABERS
Wield the power of your favorite Star Wars characters with these amazingly detailed adult collectible lightsaber replicas! Power up your weapon to see the glowing light effects, then move it to hear sensor-controlled sound effects power up, idle hum, clash, and power down digitally recorded from the films. Each FX lightsaber features a durable metal hilt for the greatest possible film accuracy, and includes specially designed display base. 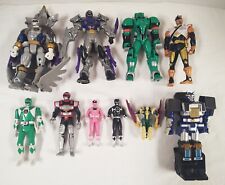 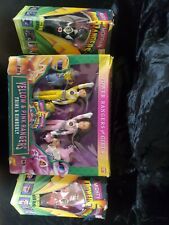 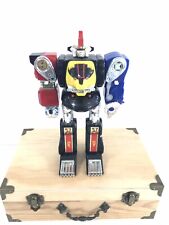