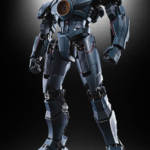 Designated as release number GX-77 in the Soul of Chogokin lineup, Gipsy Danger is recreated in exquisite detail, featuring a variety of screen-accurate weapons (including the carrier ship used as an impromptu club at one memorable moment). An electronic feature is also included- lights are planted in Gipsy’s head, chest and plasma-cannon arms.

GX-77 Gipsy Danger is currently scheduled for release in February 2018! The price is a sound 27000 Yen (or roughly $243 USD at current exchange rate). This figure is now available for preorder at all major tokusatsu retailers!