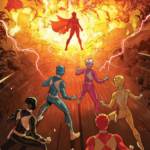 As Power Rangers: Shattered Grid draws ever closer, the anticipation for Boom! Studios’ forthcoming comic book event grows higher and higher and thanks to IGN, we have a number of new covers and concept art pieces to tease what the story has in store for fans.

First up are the latest sentries to join the evil Lord Drakkon’s growing army – the Zeo and Samurai Sentries! Much like the previously seen sentries these soldiers have augmented versions of preexisting ranger powers. The Green Zeo Sentry is equipped with a mech suit that can use a variety of weapons, whilst the Blue Samurai Sentry sports a more armoured version of the costume together with twin arm blades and red eyes glowing through their visor.

The third piece of concept art for the event is of a new villain from Drakkon’s timeline – Finster Five. Go Go Power Rangers writer Ryan Parrott pitched the character as a version of a cyborg version of Rita’s chief monster maker that has been augmented using parts from Alpha 5.

Celebrating the 25th anniversary of the Power Rangers franchise, Power Rangers: Shattered Grid kicks off in issue #25 of the main Power Rangers comic, which will be released on March 21st. You can check out the full gallery of covers and concept art after the jump, as well as share your thoughts on the upcoming event.