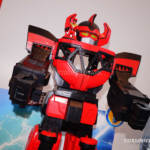 Our coverage of Toy Fair 2018 continues with a look at the offerings for Imaginext Power Rangers. Unfortunately there was not much to be seen from the folks at Imaginext. On display was a brand new repaint of the Megazord playset in a new color scheme – black and red – with no release information available. Shown with it was a Mighty Morphin Red Ranger with black highlights and a repainted Rita Repulsa figure in purple and blue. Two power coins and a purely red staff accompanied as accessories.