The Power Rangers fan community was rocked last month when the mega-event known as Shattered Grid literally shattered our expectations. And that was just the first issue of BOOM! Studios‘ Power Rangers comic event. So what happens in the SECOND issue of the Shattered Grid event? Quite a bit actually! It’s time for Mighty Morphin Power Rangers 026!

Again – major spoilers ahead! Read at your own risk!

The issue opens up in the world of Lord Drakkon. He has returned home and his troops are eager and excited at his return. Lord Drakkon seems rushed – he’s trying to get somewhere and quickly. We discover that it appears to be the lab of the evil Finster 5, the fusion (maybe?) of Finster and Alpha 5. In what can only be described as a hug to put all other hugs to shame, Lord Drakkon and Finster 5 embrace in said-hug exclaiming how much they’ve missed each other and briefly tease the reader about how much they’ve been through together. The awkward bro-hug of evil is quickly erased from memory as Lord Drakkon informs Finster 5 it’s time to embark on their great campaign, and after Finster 5 states the obstacles they face, Lord Drakkon shows off an imprisoned Ninjor teasing they now have solutions to those obstacles.

We return to our world – the present day – and witness our heroes at the funeral for Tommy Oliver. Billy breaks down during his eulogy and we flash back to events occurring immediately after his mortal wounding at the hands of Lord Drakkon. Zordon and Alpha 5 have him encased in a tube showering him with some form of energy as the other Rangers question if he’s being saved or not. We quickly transition to Zordon informing the Power Rangers that indeed, Tommy Oliver is dead. We montage the next few days – grieving Rangers, Jason absorbing the Green Ranger powers and the Dragon Shield, the teens including Bulk and Skull grieving at Angel Grove, and finish with the funeral again with Jason breaking down with Zack. The emotion is cut when Alpha 5 notifies the Rangers that the Time Force Pink Ranger is awake. 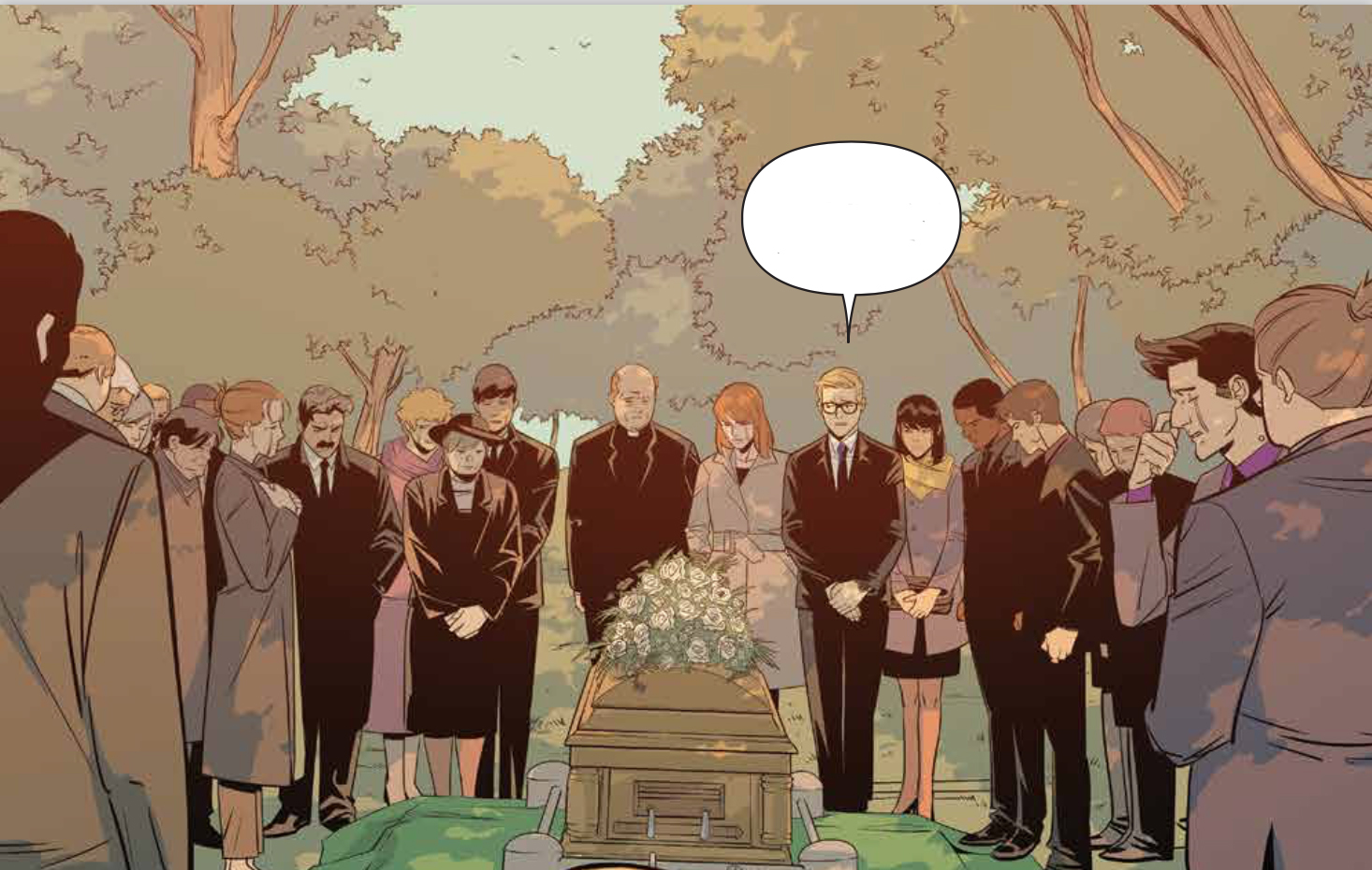 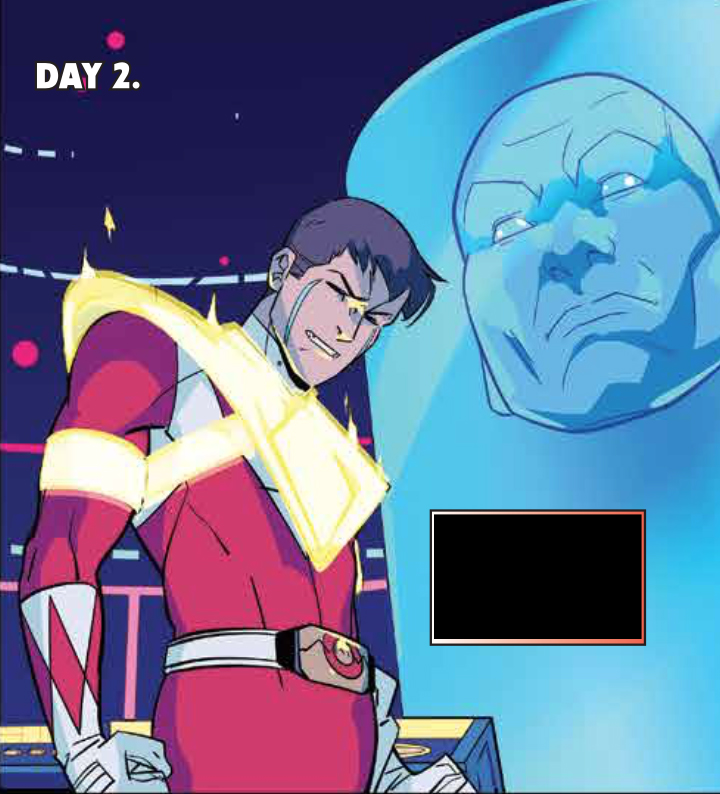 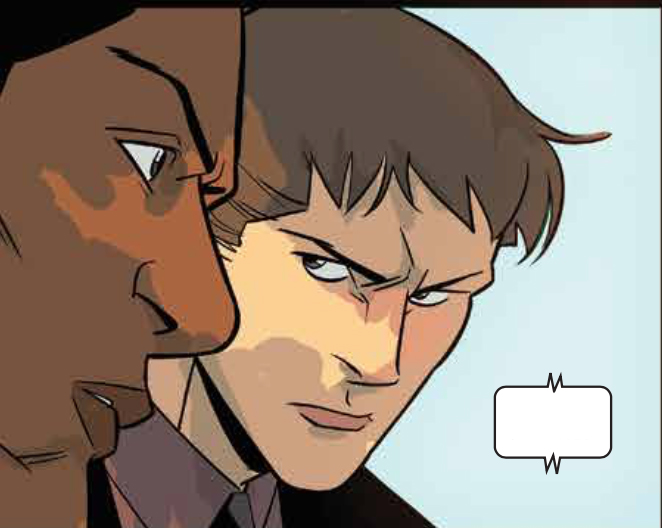 Jen reveals everything she knows to the Power Rangers including the secrets of the future (which is a big time travel no-no). She explains that the time line works in a straight line but when Tommy was killed the Morphin Grid shattered the world as we know it, so instead of the time line being in a straight line it is more like a giant circle where each team of Rangers exist in pocket universes at the same time. She theorizes that it was the Morphin Grid attempting to stop reality from falling apart entirely and thus shattering it instead. But she also theorizes that like a plane of glass that is shattered, eventually the cracks increase and compromise it entirely causing it to finally fall apart. She teases that the being she saw (who we know as Lord Drakkon) shared a similar power to the Lord Drakkon she witnessed but incredibly stronger.

We cut to the world of Power Rangers Samurai and we discover that the Nighlock have returned. Lauren Shiba, the Red Ranger sister of Jayden, is leading the team of Samurai Rangers in training as they begin to prepare to defeat the Nighlock once again. But before they can complete their training large explosions draw their attention – it’s Lord Drakkon and his army of sentries at the gate. They believe the gate can hold but a Dragon Tank fires and blows the team back, sending them in to battle. 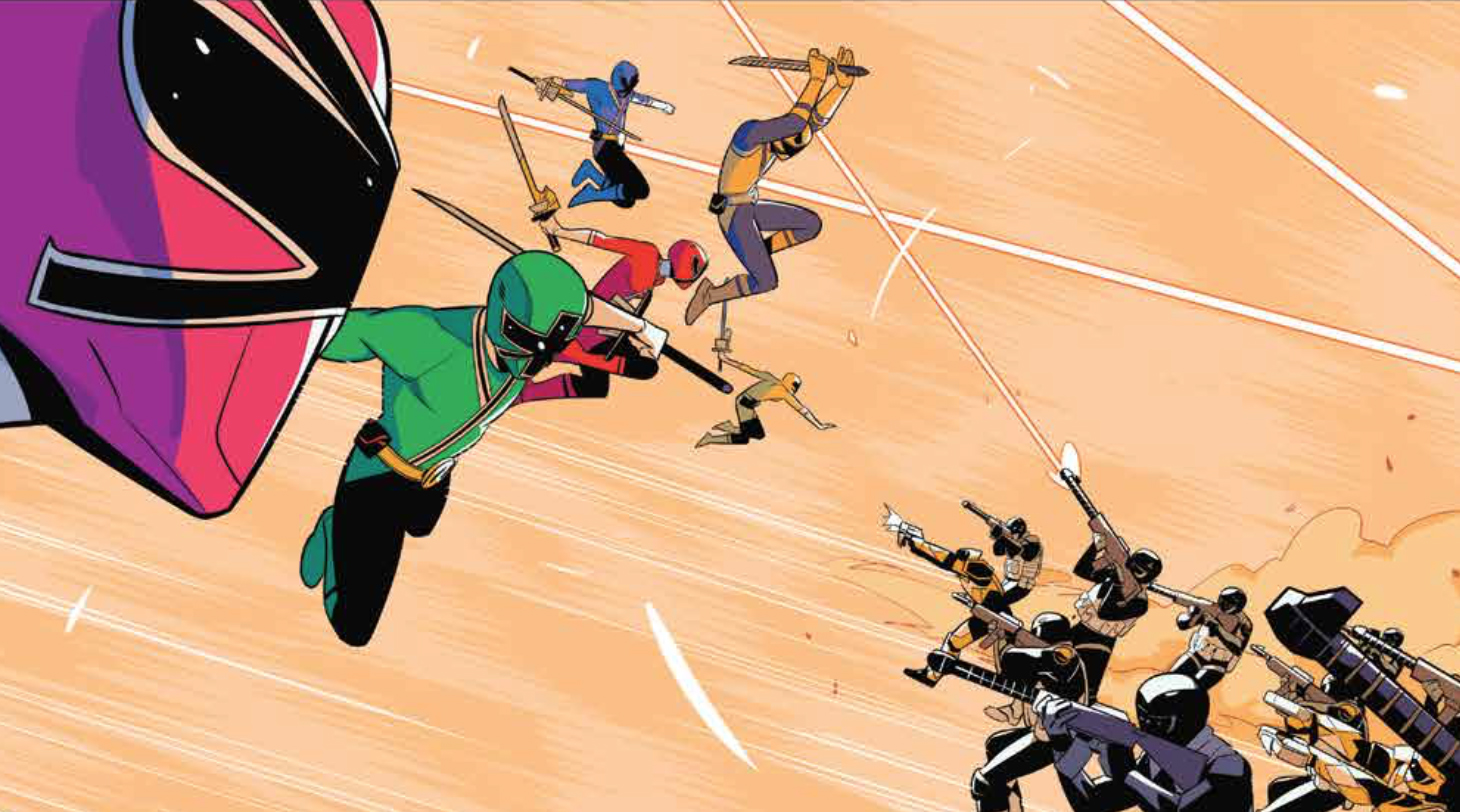 Back in the present timeline an alarm goes off and Billy and Trini reveal that before Lord Drakkon stole the Chaos Crystal they had been working on it to find a way to communicate with Lord Drakkon’s world, specifically the coinless, but that it can also track Lord Drakkon. With the timeline now existing at the same time, the Rangers can teleport between realities in chase of Lord Drakkon. The Mighty Morphin Power Rangers, along with the Time Force Pink Ranger, morph and teleport to the world of the Power Rangers Samurai to try and help the other Rangers. The dojo is taken over by Mastadon and Saber Tooth Tiger Sentries, and Zack wants to go in and raise some hell, but they detect there’s still a Samurai Ranger signal out in the wild and teleport to the location. Lauren, the Samurai Red Ranger, is reeling from the battle and is about to be apprehended by Mastadon Sentries. The Mighty Morphin Power Rangers appear and the Mastadon Sentries fire a Dragon Cannon at them. Billy activates an EMP like device that he used on Lord Drakkon in a previous issue and the sentries are stunned, allowing the Power Rangers to grab Lauren and teleport to safety.

We return to Finster 5’s laboratory where the Samuraizers are connected to a strange device. Lord Drakkon orders Finster 5 to proceed regardless of the risks, stating that the potential is worth the risk. He stands in an altar-like circle and a power force surrounds him. When he emerges his suit has changed – he now has the power of the Power Rangers Samurai flowing through him and his suit reflects their powers, with a popped collar, black pants, and a sash across his chest. Finster 5 explains that each team of Power Rangers access the morphin grid in the same way, so using more than one morpher isn’t necessary and could actually be dangerous. Finster 5 continues to say that they can use the other Samuraizers to create sentries, and states that they have much to conquer as they approach what looks to be a design of a device of some sort. 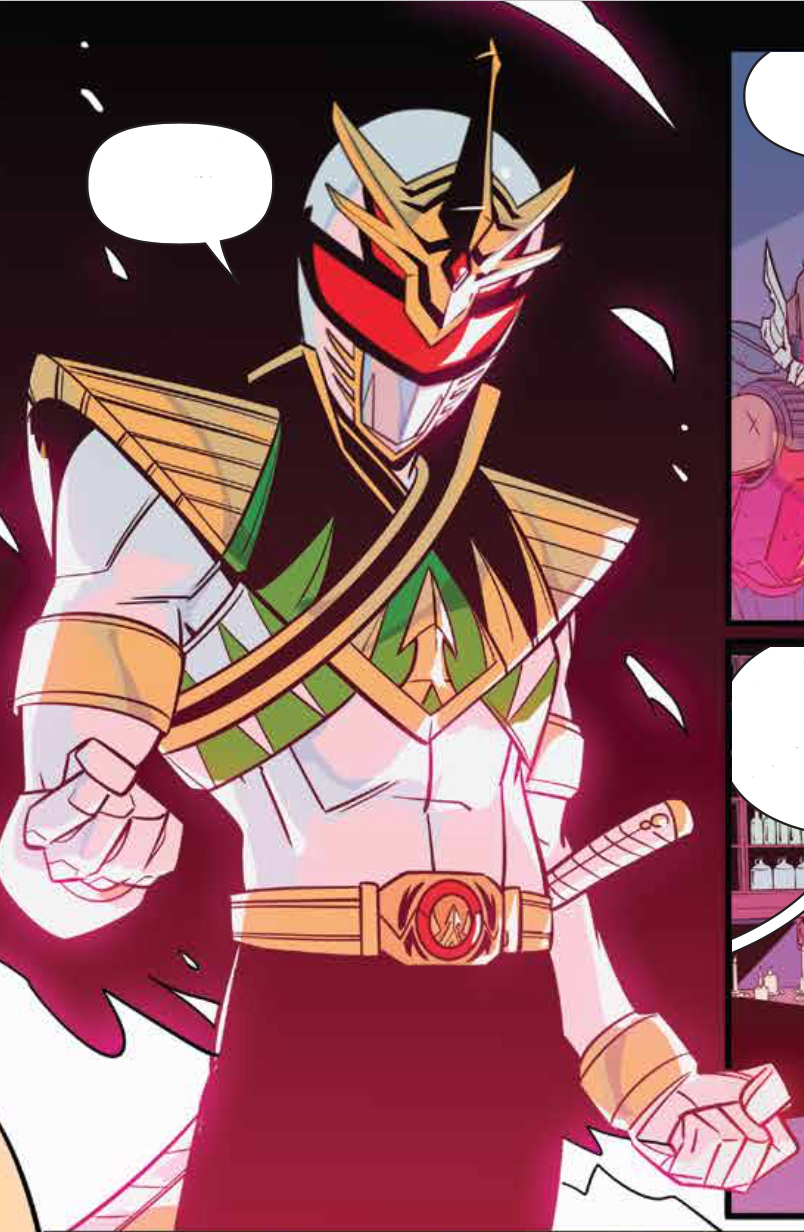 Kyle Higgins continues to showcase how much of an under-valued talent he is as he continues to portray these characters true to their original form but with a sort of reformatted grit and determination fitting to the trials of tribulation that they currently exist in. The raw emotion from losing one of their own is present. When Zack wants to go smash up the Mastadon Sentries, you want him to. You feel like Jason could pull out the Power Sword and take down the entire army of Lord Drakkon. And you feel Kimberly could pierce Lord Drakkon’s skull at any moment. Billy’s fragile psyche is shaken as he was only finally beginning to come to terms with himself and the skills he does, and more importantly does not possess, and now he’s lost someone he grew close to that he couldn’t help. And Trini, feeling helpless to help any of her friends.

And the awkwardness and overall creepiness that is Lord Drakkon – the fact that he’s Tommy but something much, much darker and more complex. The fact you go from hating Lord Drakkon to suddenly feeling for him – the hug to beat all hugs pulls at your heart AND YOU CANNOT FIGURE OUT WHY!! Kyle Higgins served up the death of Tommy Oliver as an appetizer to the Shattered Grid and now we’re getting our first look at the main course – and it’s delicious.

We’ve said it before and we’ll say it again – Kyle Higgins will go down as one of the most memorable, if not the MOST memorable, content contributor for the Power Rangers franchise. Thank Zordon that in the year of the 25th Anniversary of Power Rangers that he’s helming the flagship comic book.

Daniele Di Nicuolo used Issue 025 as a warm up for what are simply breath-taking visuals in this issue. You feel the raw emotion from Kyle’s writing in every panel, and the shot of all seven Power Rangers teleporting away from Lord Drakkon is my honest favorite piece, with Jason’s tears as he uses the Dragon Shield being a very close second. I want every single panel that is drawn as a piece of art I can buy in larger format to hang around the house.

Mighty Morphin Power Rangers 026 continues to build up what can only be predicted as the most epic climax battle in Power Rangers history. With Lord Drakkon absorbing powers and growing more powerful as the Power Rangers grasp what is happening and plan their counter-attack … just please give us the Jason vs Lord Drakkon battle we’re all clamoring for. We want to see Jason rough up Lord Drakkon while wearing the Dragon Shield for Tommy.

Go get this issue. This is the Power Rangers that the older fan has been begging Saban Brands for. And while we will pry never see this in any format other than comic book for a variety of reasons, let us all bask in the joy while we have it. Go Go Power Rangers and Go Go to your local comic book store and pick up Mighty Morphin Power Rangers 026 on sale now!