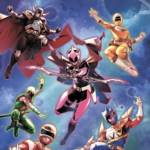 There are no real details about how this new team comes together – or what happens to the team we know and love – except that all will be revealed by the time the team takes center stage! If you want to see more stories of the original cast of Mighty Morphin Power Rangers, you will need to go check out Go Go Power Rangers.

We’re signed up for this one! Thanks to ComicBook.com for the story!