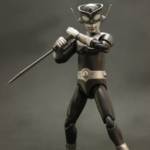 You may recall that last week, we reported on an upcoming special release of Redman Volume 2 for Tokyo Comic Con. This will be the first release of volume 2 ahead of it’s general Japanese language release in mid-December. An English language release has still yet to be announced.

However, Evolution Toy let it slip a little early last week that they would be offering a Redman 2: Dark Channel Dark Limited Edition. This special edition will include a brand new offering from their HAF Hero Action Figure line in the form of Redman Dark! Now, we have our very first official look at this figure thanks to a follow up tweet from Evolution. Redman Dark is a character that is (so far) exclusive to Redman Volume 2, and his figure will be even more exclusive. Included only in the Redman 2: Dark Channel Limited Edition at Tokyo Comic Con, this set will retail for 12,000 yen.