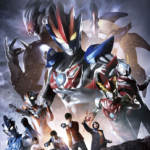 Though the series itself may about to come to an end, Ultraman R/B fans still have plenty to look forward to as their story continues on into Ultraman R/B the Movie: Select! The Crystal of Bonds! As has been the case with the previous New Generation Ultra films, the film will also see the previous Ultra hero make a return as Riku Asakura/Ultraman Geed joins the cast.

As well as releasing promotional images for the film’s new characters, Tsuburaya Productions have also launched the first trailer for the film that shows them off in action. The big news is that Asahi Minato will be joining her brothers as the previously revealed Ultrawoman Grigio! The three siblings will also combine into the new Ultraman GRB.  Joining them is also the mysterious Ultraman Tregear, who will serve as the film’s main antagonist.

Ultraman R/B the Movie: Select! The Crystal of Bonds will be released in Japanese cinemas on March 8th 2019. In the meantime, check out the trailer below and let us know your thoughts!