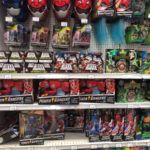 Fan Aaron James has reported spotting the first wave of Power Rangers Beast Morphers toys at a Toys R Us in Ontario, Canada.

This sighting includes the first case of Beast Morphers action figures along with several roleplay weapons.

Previous reports indicated that Beast Morphers would not be seen in stores until APRIL 2019. Could the street date have moved up a bit? Or is this an isolated incident?

Stay tuned to TokuNation to find out!