The long-awaited return of Power Rangers Beast Morphers is finally at hand!

Beast Morphers returns to the airwaves Saturday, September 19 2020 at 8AM EST with a brand-new episode titled “The Evox Snare!”

A preview has been released online for this episode but the video does contain significant spoilers. Be sure to check it out in our Official Beast Morphers Season 2 Discussion Thread and remember to share your thoughts and fears on this exciting new series!

Blaze was meant to be a hero, a Power Ranger! Trained by Grid Battleforce with his teammates Roxy & Ravi, Blaze was chosen to become the Red Ranger. But on the day the team should have formed, fate and Evox, intervened. Taking the essence of Blaze and his abilities, Evox has created an Avatar of the would be hero, a new Cyber Villain general to lead his armies of Tronics & Robotrons! Now what began as a simple grudge between the original Blaze & Devon Daniels has morphed into something else entirely, as the would be ranger turned avatar battles the man who’s taken his place, the new Red Ranger……

Blaze joins the ever growing Power Rangers Lightning Collection as one of a handful of evil rangers in the line. An excellent addition, Blaze brings with him an intricately detailed sculpt with all the articulation hallmarks we’ve come to expect from this line, as well as a ton of accessories. Blaze is armed with extra hands, both his sword & an effect part for it and even the Robotron-Maker briefcase/laptop, but also includes an alternate unmasked head featuring a brilliant likeness of Blaze actor Colby Strong! As far as villains go, Blaze may be the best one in the line yet.

Check out our full 60+ image gallery of Lightning Collection Blaze after the jump! Just click “Discuss on the TokuNation Forums” at the bottom of this post to be taken to the full gallery and review thread. Next time we’re stronger than before with another Lightning Collection gallery from Power Rangers Zeo!

New York Toy Fair rages on and we’ve obligated TokuChris to live on the show floor at the Javitz center for the duration of the event! The results speak for themselves as he brings us a fresh look at the Power Rangers Beast Morphers display from Hasbro! New and recent items featured at the booth are:

Keep it tuned to TokuNation as we continue to bring you more updates from New York Toy Fair 2020! Be sure to also follow up with Transformers news from the con by following our network partners at TFW2005.com and see general toys & collectibles news courtesy of the great team at ToyArk.com! And of course keep it in the Hasbro family with some fantastic G.I. Joe coverage from our other sister site Hisstank! Be sure to follow our entire network to get absolutely the most up to date information on all things coming out of NYTF!

After much speculation, we have finally learned the premiere date for the second season of Power Rangers Beast Morphers!

Beast Morphers Season 2 will officially begin on February 22, 2020 with a new episode titled Believe It Or Not! Sadly, no plot details have been confirmed at time of writing.

Stay tuned to TokuNation as we keep you up to date on all Beast Morphers reveals!

Ravi Shaw was meant to be a Power Ranger. Selected & trained by Grid Battleforce, Ravi earned his place & his power with his teammates. But before they could become Rangers, Blaze & Roxy became something else. Loyal Avatars of Evox! Ravi’s former comrades would have done the same to him too if not for the intervention of Devon Daniels & Zoey Reeves. Joining his new allies, Ravi’s body is infused with Morph-X energy as well as gorilla DNA, turning him into the mighty Beast Morphers Blue Ranger!

Joining the likes of the Beast Morphers Red & Gold Rangers, the Blue Ranger is the third member of his team to make it to the Lightning Collection. With the evil ranger Blaze coming up in Wave 4 of the line, this group of characters continues to expand as well. As is, the Blue Ranger is another welcome member of the team! Packing a (literal!) punch, the Blue Ranger includes two effect parts as well as the Beast-X Saber and even a civilian head featuring the likeness of Ravi’s actor, Jazz Baduwalia!

Check out the full 60+ image gallery of the Beast Morphers Blue Ranger after the jump. Just click “Discuss on the TokuNation Forums” at the bottom of this post to be taken to the full gallery & review thread. And remember that commenting in this gallery thread will qualify you for one (1) additional entry in our annual Toku Toy Box giveaway! Offical rules HERE. 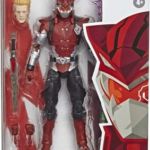 We now have a second image from the next wave of the highly popular Power Rangers Lightning Collection!

The Cybervillain Blaze from the most recent season, Power Rangers Beast Morphers joins the Lightning Collection lineup. Blaze comes with a full assortment of weapons, alternate hands and an unmorphed head.

Cybervillain Blaze will be part of the fourth wave of the Lightning Collection, currently scheduled for release in Spring 2020.

Be sure to join in our Ongoing Lightning Collection Discussion Thread to share your thoughts and fears on this exciting series! 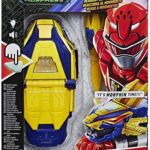 “This isn’t what I expected when I woke up this morning.”

A hero by chance, Devon Daniels steps up to defend the Morphin Grid from Evox! Bonded with cheetah DNA and imbued with Morph-X energy, a Red Ranger with beast morphin might rises! The Lightning Collection from Hasbro has continued to move along at a pretty brisk pace, and now we’re taking some time to break down one of the most recent release with Wave 2’s very own Beast Morphers Red Ranger!

We’ve put together a full 80 image gallery of the Beast Morphers Red Ranger that you can see after the jump along with out review. Just click “Discuss on the TokuNation Forums” at the bottom of this post to head to our discussion thread. Next time, the Overlord of Time & Space arrives, Oma Zi-Oh!