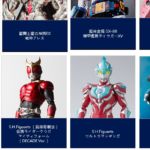 As the Kamen Rider line of S.H. Figuarts continues, inevitably older releases go up in value. This has been especially true for the incredibly popular line of Shinkocchou Seihou renewal type figuarts. To date, of the myriad Seihou releases, only Kamen Rider Kabuto has ever received a reissue and that was two years after it’s initial release. Today that may change.

In confirming new items releasing in October, Tamashii Nations has announced S.H. Figuarts Shinkocchou Seihou Kamen Rider Kuuga (Decade Ver.). Kamen Rider Kuuga, or a version of him at least, played a significant role as a support character throughout the Kamen Rider Decade TV series and it’s movies. Mighty Form Kuuga was the most often seen form in Decade as well, though it should be noted that all of Decade Kuuga’s forms are identical to the original save for an additional form. So the exact nature of this “Decade Version” is unknown currently.

Does being specifically branded as the “Decade Version” allow Tamashii to circumvent some of their own self imposed rules for reissues like the Premium Color line of Dragonball figuarts? Or does this imply that the figure has some new accessories exclusive to the Kuuga version of the character? One thing to note, is the official image used to announce the figure. It’s completely new, as in, it’s not from the set of photos released for the original Seihou Kuuga orders. It would be quite odd of Tamashii to do a brand new photo shoot for a figure that has pre-existing official photos, unless there are new accessories in play. We’ll continue to report any more new information made available for this release.