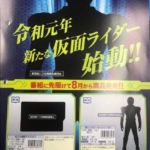 You may recall that around this time last year, we were all awaiting the first images of Kamen Rider Zi-O. When the first teaser silhouette did eventually surface, it was of a very generic variety. A featureless rounded silhouette that gave nothing away. It would seem now that, this type of initial teaser may become the standard, as it’s being used once again for initial Kamen Rider Zero-One solicits.

The image that’s circulating now features the sound rounded featureless generic design. And given that Zero-One will be the first Reiwa Rider, some secrecy around his finalized design is to be expected. So there’s no real information to be gleaned from this solicit. Other than that, this catalog image does confirm the collectible gimmick for this year as the “Insert Card”.

As more information becomes available for Kamen Rider Zero-One we’ll be sure to update you. Given the time of year it is, it’s only a matter of time before both the gimmick for the series and the finalized design of Zero-One leak online. This initial image came via the Candy Toy Sentai CTS Facebook page.