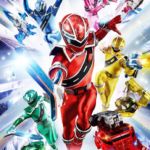 Earlier in the week, we were delighted to our first full look at the 44th Super Sentai: Mashin Sentai Kiramager and since then, some new exciting promotional material’s come up giving us our first look at the core Mecha of the team;

Blue will pilot a jet, Pink pilots a helicopter, Yellow’s a crane excavator, green’s is a sports car, while the Red Ranger drives a truck-like vehicle of some sort.

We were initially led to believe that Red’s mecha will be the sports car, but it seems like that initial scan that was posted was false though the popular theory right now is that the team will have an evolution of the color/power swapping gimmick first employed by 2014’s Ressha Sentai ToQger but we have no way of confirming this at this time.

There is still much we don’t know about this exciting new entry into the Super Sentai series, so be sure to check back with us and we’ll provide you with more info as it becomes available. In the meantime, make the jump to our disscussion thread and let us know what you think in the comments.