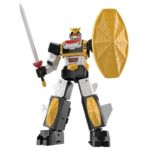 Because two announcements of new Toei Spider-Man product isn’t enough for one day – here’s a third!

Figsoku.net has posted up preview images of an upcoming Super Minipla Leopardon.  For those uneducated on what Leopardon was – it was the mecha that accompanied the Toei Spider-Man character and has become quite a cult classic favorite.  A drawing was even seen in the background of the Oscar-winning Spider-Man: Into the Spiderverse animated feature from 2019 and the Toei Spider-Man is heavily rumored to appear in the sequel to the film.

Here’s the rough, Google-translated version of the product details.

Commercialized Leopardon that appeared in “Spider-Man Toei TV Series” from Super Minipla!
You can transform from Marveler to Leopardon.
In addition to the Sword Vicker and Spider Protector, effect parts that reproduce the scene of storing the Spider Machine GP-7, the scene of throwing the Sword Vicker, and the scene of launching the arm rocket are also included.
It is a volume kit with a special pedestal that can decorate the marveler in flight.

Super Minipla Leopardon is set to release in August 2020 for 4,950 yen and should be available to pre-order soon.