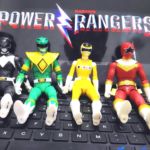 After much speculation and some early coded listings, we at last have confirmation on the lineup for the next wave of the Power Rangers Lightning Collection!

Fellow Ranger fan whenaiyy shared the first images of Wave 6, which consists of:


Fans will be happy to note this edition of the MMPR Green Ranger lacks the “Fighting Spirit” silver stripes from his previous exclusive version.

With this wave, the Mighty Morphin Power Rangers become the first team with a COMPLETE Lightning Collection release.