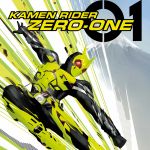 The excitement of Kamen Rider Zero-One in comic book format continues and we’re incredibly excited to be able to share this exclusive first look with you courtesy Titan Comics!

Behold – Cover A of Kamen Rider Zero-One Issue 03!  This cover is drawn by Miguel Mercado, known for his amazing exclusive covers on other properties such as BOOM! Studios Mighty Morphin Power Rangers/Go Go Power Rangers/Power Rangers Universe, G.I. Joe, Thor, X-Men, and so much more.

You can pre-order Kamen Rider Zero-One Issue 03 at the links below:

Issue details are below!