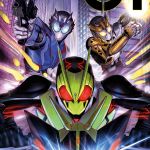 The details of Kamen Rider Zero-One Issue 03 are as follows: