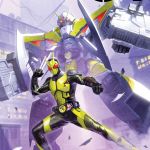 We are pleased to once again give you an exclusive first-look at the upcoming fourth and final issue of the Kamen Rider Zero-One comic book!  Our first cover reveal for you – the first and main cover – is draw by Alex Ronald!  Check out the details blow!