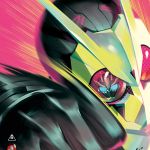 We’re back with another exclusive cover reveal for the four issue limited series of Kamen Rider Zero-One! Written by Brandon Easton, drawn by Hendry Prasetya, the story follows Aruto, aka Kamen Rider Zero-One, as he faces off against the villainous new threat of Ragnarok! This is the second of three covers for Issue 04 and it is drawn by V.V. Glass!

Check out the details below!

Fans in the US can pre-order your copies from Previews World.

Fans int he UK and Europe can pre-order your copies from Forbidden Planet.

Be sure to come back tomorrow for the final cover reveal!  Special thanks to Titan Comics for the reveals!