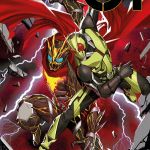 Tomorrow fans all over through US and Europe will be able to read the first issue of Kamen Rider Zero-One, written by Brandon Easton and drawn by Hendry Prasetya with colors by Bryan Valenza.  This comic has been hotly anticipated by fans of Kamen Rider Zero-One (and fans of comics in general) since the initial announcement and especially since the first artwork and covers dropped.

We’re thrilled and humbled to share with you our official review of Kamen Rider Zero-One Issue 01.

Read on to hear our thoughts!

Before we even begin diving in to the fun details of the review, we need to spend a bit of time talking about the setup of the book.  Brandon Easton has the difficult task of creating a first issue of an established property that, likely, a lot of regular comic book readers have never heard of or seen (at least in nearly 30 years with Saban’s Masked Rider).  That’s the joy of our niche Japanese property that we love so much – the average reader thinks it’s “Japan Power Rangers, or something”.  That means Brandon needs to give enough exposition to keep the interest of a brand new reader while not boring the fans of the property that already know all about Aruto, Izu, A.I.M.S., etc.

For the most part – Brandon succeeds.  Exposition is given when it’s needed and most characters are given context of who they are and their importance in relation to Aruto when they’re shown in the book – which looks to take place early on in relation to the Kamen Rider Zero-One television series.  The story, overall, is interesting and leaves me wanting to read the next issue.  There’s mystery, intrigue, and yes – thanks to Aruto – some comedy and great one-liners.

Fans of the show should enjoy the comic.

The artwork is drawn by Hendry Prasetya, and fans of Power Rangers should remember him and his work from the beginning of BOOM! Studios Mighty Morphin Power Rangers comic book all those years ago.  Hendry has the ability to capture iconic poses and transcribe them to comic form incredibly well.  A lot of panels including Zero-One could be standalone posters.  I cannot stress enough how great Kamen Rider Zero-One looks (in all his forms, gasp!) in this book.

One critique I do have – and I imagine others well as well – is how Aruto is shown when he transforms in to Kamen Rider Zero-One.  Specifically how the Progrise Keys are used.  In the show, Aruto would scan the Progrise Key against the Zero-One Driver before opening up the Progrise Key and inserting it to complete the transformation (including in to other forms/power-ups).  The comic only ever shows the Progrise Key being scanned, never opened or inserted.  Obviously there are only so many panels to work with and a lot is covered in this first issue so my hope is that we’ll see more involved transformations in future issues.

Overall the artwork is very well done with only minor nitpicks here and there.  Hendry does a great job with Kamen Rider Zero-One, Izu, and Aruto in his civilian form.  My personal favorite is Izu – I think Hendry Prasetya did a fantastic job capturing her likeness from the show and adding his own personal touch to the characater.

The colors of the issue are done by Bryan Valenza, best known for his work literally everywhere in comics, doing cover work for Marvel and DC Comics as well as interiors.  Landing Bryan on this book was a steal and his colors make all of Hendry’s artwork pop even more so.  There are some panels in this book where I felt like it could have been taken straight out of the show due to Bryan’s coloring.  I am excited to see the next few issues and how Bryan’s coloring looks on other characters that we assume are coming.

The first issue of Kamen Rider Zero-One does everything it needs to do and then some.  New readers are given enough exposition to at least grasp some understanding of what’s going on while loyal diehard fans will not feel bored breezing through said exposition.  The artwork, overall, is fantastic.  I do have some critiques but they don’t take away from the story at all and are more of a “hey did you notice” type of things.  The colors are fantastic.

Aruto Hiden is KAMEN RIDER ZERO-ONE! Along with his trusty humagear companion Izu, he’s saved the world numerous times as the insectile superhero! But when his company HIDEN INTELLIGENCE is attacked by the mysterious RAGNAROK, Aruto must not only face the volcanic cluster cell-powered villain but also his own past…