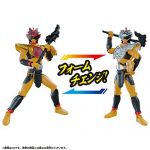 At last we have our first look at the sixth member of the Avataro Sentai DonBrothers!

Don Dragoku will transform using the Ryuko Nogeki– a naginana spear enhanced by Avataro Gear powers. The Don Torabolt form has a unique accessory called the TiGuarDra that can store multiple Gears.

Finally, Don Dragoku possesses an ALTER form- resembling a green dragon. In this new form Dragoku can channel the powers of past Super Sentai– demonstrated with the aid of Shuriken Sentai Ninninger Alter!

Stay tuned to TokuNation for further details on this new Super Sentai hero!