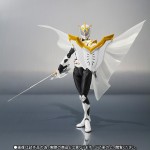 Coming as a Tamashii Web Exclusive in November and rounding off the 13 Kamen Rider Ryuki Riders is Kamen Rider Femme! Appearing in Ryuki’s Episode Final movie, this female Rider may also be known as Kamen Rider Siren to those of you who watched the Kamen Rider Dragon Knight US adaptation.

Sadly Femme does not come packaged with her contract monster Blancwing, however she will include a selection of alternate hands, advent cards, Blanc visor (with swappable parts), wing thrasher, wing shield and a personal stand. 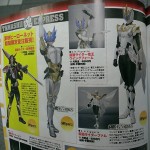 The first major releases for SH Figuarts this November are confirmed!

The last Kamen Rider Ryuki hero, Kamen Rider Femme (or “Siren” if you prefer) is FINALLY set for release! In addition, Kamen Rider Den-O’s special “Wing Form” will also make the jump to to Figuarts at last!

During Tamashi Nations earlier this year, Bandai featured a full display of all 13 Riders from Kamen Rider Ryuki.

New magazine scans gives us our first look at these figures, including Kamen Rider Tiger’s yet to be released Contract Monster Destwilder, along with Odin, Femme, Imperer, Scissors, Verde Alternative Zero and their respective Contract Monsters!

No other details regarding price or release date are known at this time. Stay tuned, we’ll have more updates as they become available!