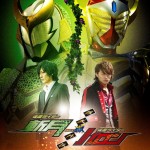 A new trailer for the upcoming V-cinema Kamen Rider Gaim Gaiden has just streamed! Giving us our first good look at this film we see Zangetsu using the Proto-Suika Lock Seed for the first time engaged in combat with Kamen Rider Idun, and we’re treated to Baron using the forbidden Taboo Lock Seed to take on Kamen Rider Tyrant!

This video not only provides a look at this exciting new film, but we’re also given a chance to see how the DX Taboo Lock Seed functions. And who better to show these features off than Kamen Rider Baron himself?! When used with a Sengoku Driver the phrase “Ringo Arms! Desire, Forbidden, Fruits!” plays. The Taboo Lock Seed will be included in a 2-pack with the Kamen Rider Idun rider indicator faceplate.

Check out the full video below!