Yesterday marked the 75th birthday of the late Kamen Rider creator Shotaro Ishinomori! Ishinomori worked on a number of titles, ranging from Cyborg 009 to the likes of Zelda! Sure we know him from his work on the Rider genre of Tokusatsu, but did you also know he held a Guinness World Record? More from Comics Alliance:

After working with Tezuka, Ishinomori branched out on his own to create a body of work that would eventually be given the Guinness World Record for the most pages published by a single author, clocking in at a pretty staggering 128,000 pages

Not too shabby for Osamu Tezuka’s former assistant!

Crunchy Roll has reported that the Ishinori Manga Museum will reopen on November 17th! It was damaged during the March 2011 earthquake/tsunami and repairs are almost done. More:

In November 17th, the museum in his honor will be holding a reopening ceremony – with branding that draws the connection to Ghost in the Shell: Stand Alone Complex director Kenji Kamiyama’s new reminagined Cyborg 009 anime movie 009: Re Cyborg.

The Ishinomori Mangattan Museum is built by corporation of national government and Ishimaki City in 2001 and became a tourist destination, attracting 180,000 visitors annually. During the March 2011 earthquake and tsunami, many of the building around the museum were destroyed and its facilities were substantially damaged.

With the help of public fundraising efforts, repair efforts are now nearing completing.

A November 17th reopening ceremony is free and open to the public.

New and old fans alike, can experience Ishimori’s classic creations through Comixology’s patent pending Guided View reading technology. For owners of the new iPad, each series can be experienced in Comixology’s high definition CMX-HD format. The launch titles are:


“We are honored to team up with Ishimori’s and bring a whole new generation of readers to such classic manga series as Cyborg 009 , Kikaider and Skull Man,” said co-founder and CEO David Steinberger. “Comixology has the best consumer experience anywhere and having the most diverse library available is part of that great experience. Adding these seminal works by Shotaro Ishinomori’s will certainly delight our customers and bring new readers to the platform.”

“Ishimori’s is very excited that readers everywhere will be able to experience Shotaro Ishinomori’s work via Comixology, Shotaro Ishinomori would be very happy if he saw this new digital technology making his manga available to the world.” said Masayasu Takigawa, EVP, Ishimori Production Inc. “Comixology’s shopping and reading experience has no peer in the digital comics marketplace. We look forward to expanding Ishinomori’s library with Comixology for years to come.”

Recently Ishimori Production Inc. partnered with Archaia to create a modern adaptation of the classic Cyborg 009 manga series. Written by F.J. DeSanto and Bradley Cramp and illustrated by Marcus To, Archaia is set to release the graphic novel based on Ishinomori’s original creation early in 2013 and will also be available digitally through Comixology.

About Comixology
Founded in 2007 with the mission of bringing comics to people everywhere, Comixology revolutionized the comic book and graphic novel world. With the development of the Comixology digital comics platform – with buy-once, read-anywhere availablility across iPhone, iPad, Android, Kindle Fire, Windows 8 and the Web – Comixology provides the easiest way worldwide for people to enjoy comics anywhere they happen to be! Regularly ranking as the top grossing iPad app in the entire iTunes App Store, Comixology is one of the leading drivers of the iPad economy. Providing the most digital comics on the most devices, Comixology will not stop until everyone on the face of the planet has been turned into a comic book fan. 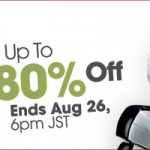 Hobbylink Japan is currently having a Kamen Rider super sale! You can save up to 80% on select items. The sale ends on August 26th, 6PM JST. Save on items such as Miyuki Tezuka, SH Figuarts Kamen Rider Raia from Kamen Rider Ryuki! 124 select items are on sale, ranging from MG FigureRise kits, Super Imaginitive Chogokin(SIC), SH Figuarts to Kamen Rider Fourze Model Change figures, SD keychains and more! 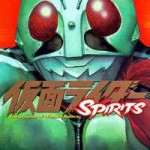 Thanks to our member KRiderZim, It has comed to our attention that Vertical Publishing has put up a poll to ask fans to choose a manga series for them to bring over in english.

Now, one of them is none other than Kamen Rider SPIRITS!

For those who don’t know, Kamen Rider SPIRITS is a manga series that continues the story of the previous Kamen Riders up to Kamen Rider ZX

Thanks again to KRiderZim for letting us know!

Bandai Namco Games have been streaming videos on their official YouTube account for the upcoming Japanese Tokusatsu video game Kamen Rider Generations 2. Check out the new trailer below!

The game will feature over 100 different characters and boasts over 50 playable Kamen Riders. Also advertised is a new multiplayer mode. You can purchase you copy on August 2nd. The game is being released for both Nintendo DS (5,230 yen/~$66 USD) and Sony PSP (6,280 yen/~$80 USD).

Pre-order bonus includes a sticker book featuring 50 riders as well as codes to immediately unlock and play those characters. 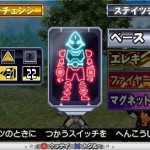 Games website Siliconera has posted news about the forthcoming DS/PSP game All Kamen Rider: Rider Generation 2, which is due for release on August 2nd in Japan.

As well as boasting over 50 playable characters, the game will also feature all 40 of Kamen Rider Fourze‘s module switches!

You can check out the screenshots from this side-scrolling beat ’em up after the jump!