This new powered-up form of Kamen Rider Fourze from Movie Wars Ultimatum comes with skis, 2 Nadeshiko rockets, 4 hands and a swappable Astro Switch. This review also contains images of what the figure looks like with the rockets and skis removed.

See a selection of images from the full review after the jump!

Toei’s famous astral heroes are teaming up to teach youngsters about space history!

A special event hosted by Saitama Youth Astronomical Museum features Fourze & Gavan telling the history of Voyager 1, the spacecraft launched beyond our solar system with recordings of our world to attract the possibility of alien life.

What effects this may have on Megatron’s plans for the future of Cybertron are yet to be determined. :) 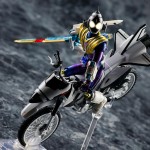 The Figure has no unique accessories, but instead has a plethora of optional hands to make up for that.

Bandai’s Tamashii Nations Akiba Showroom in Akihabara has added the forthcoming web exclusive SH Figuarts Kamen Rider Fourze Meteor Nadeshiko Fusion States to its display! Though only one image has surfaced, it gives us a head-on look at this new Kamen Rider Fourze form.

Kamen Rider Fourze Meteor Nasheshiko Fusion States will be released as a Tamashii Web Exclusive in July, priced at 4200 yen.

Don’t know where to get your Tamashii Exclusives from? Stop on in with Tokunations’ resident middleman, Sentai Tamashii, and his Middleman Service Thread to secure your orders for this figure or any other upcoming exclusives!

While it is currently unknown what accessories the figure will come with (if any), from the picture we can see that it will feature the two Kamen Rider Nadeshiko coloured rocket modules as seen in the movie, as well as the pair of ski-like attachments.

Don’t know where to get your Tamashii Exclusives from? Stop on in with Tokunations’ resident middleman, Sentai Tamashii, and his Middleman Service Thread to secure your orders for this figure or any other upcoming exclusives!

A look at Fourze’s new form from the Upcoming Movie Taisen Ultimatum! He utilizes a new N switch and gets double silver rockets, skis and Nadeshiko’s eyes! 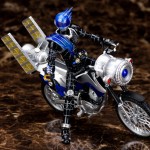 Kamen Rider Meteor gets his ride with the release of the Web Exclusive S.H.Figuarts Meteor Star.

Toy Revivwer Shishioh brings us a photo gallery of this bike, which includes another set of gripping hands for S.H.Figuarts Meteor! Check out his gallery after the jump!

In the past week we’ve received a lot of new information about Kamen Rider Movie Wars Ultimatum, this seasons Kamen Rider crossover film. Now we have our first real look at the movie!

Credit: KamenRiderOOO of the Tokunation Forums! 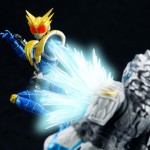 Although Kamen Rider Fourze has come to an end, the show continues on through the release of S.H.Figuarts Meteor Storm. Thanks to toy reviewer Shishio.info for the extensive photo gallery!