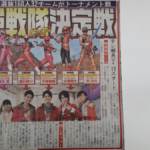 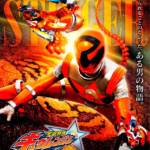 In this special release, Stinger recalls his past adventures against Jark Matter & the hunt for his treacherous brother Scorpio- triggered by a mysterious young woman with a deformed arm that grants her unusual powers.

Directed by longtime tokusatsu veteran Koichi Sakamoto, Episode Of Stinger will be released on DVD & Blu-Ray on October 25, 2017! 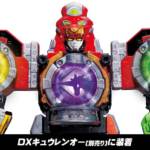 A special V-Cinema project has been announced for Uchu Sentai KyuRanger!

Titled Episode Of Stinger, this release will focus on the adventures of Sasori Orange and his battles against the Jark Matter. Sadly, no major plot details are available at time of writing.

Veteran tokusatsu director Koichi Sakamoto will be in charge of this project. 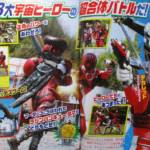 *Elsewhere, Sasori Orange continues his vendetta against his evil brother Scorpio. But Oushi Black steps in, also having personal reasons to hate Scorpio. Who will survive the encounter?

*Last but CERTAINLY not least is confirmation of a special crossover episode! The KyuRangers will be joined by Dekarangers’ DekaRed and the Space Sheriff Gavan!

Many more adventures await the 41st Super Sentai Series! Stay tuned to TokuNation as we keep you up to date on all KyuRanger news!