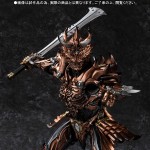 While the franchise of the golden knight Garo continues in the form of it’s latest show, Garo Goldstorm, the toyline of this popular franchise continues as well. While new releases tend to be spaced out and are very rarely standard retail ones, we’ve got a brand new surprise reveal headed our way. Slated as an exclusive for release in December is Makai Kado Wicked Bones Knight Giru!

Makai Kado Giru is one of the more fearsome designs in the franchise and makes the jump to toy form wonderfully and will be an excellent companion piece to your Shadow Knight Crow. Makai Kado Giru will be released as a Tamashii Web Exclusive in December for 7560 yen.