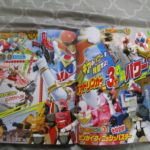 We are drawing ever closer to the 45th Super Sentai series, Kikai Sentai Zenkaiger and a plethora of new images from this upcoming series have now been published online!

This gives us our best look yet at the abilities of the Zenkaiger team- specifically the unique Sentai Gears that power the Zenkaigers.

These Gears contain the powers of past Super Sentai and can be activated in combat for new skills- for example, ZenKaiser is seen using the Dobutsu Sentai Zyuohger Sentai Gear to gain the wings of ZyuohEagle.

In addition, the new scans offer our first proper look at the villain group for this series- the Evil Dynasty Tojitendo, a sinister group out to eliminate all other realities from existence. 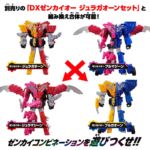 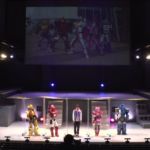 Heading off the conference this evening was a cast reveal-

*ZenKaiser (the only human Ranger in the cast to date) will be played by newcomer Kiita Komagine.

The other four members of the Zenkaiger team are robotic Kikanoids and will be portrayed via voice & suit actors.

*ZenkaiZyuran is voiced by Shintaro Asanuma
*ZenkaiGaon will be voiced by Kaji Yuki
*ZenkaiMagine is played by Yume Miyamoto
*ZenkaiVroom gets his voice from Takuya Sato.

A new teaser trailer for the series was also released online – highlighting the return of some past Super Sentai heroes.

Kikai Sentai Zenkaiger begins on March 7 2021! Stay tuned to TokuNation for further details on the next chapter in Super Sentai history! 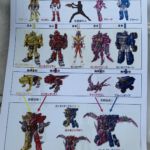 We are growing ever closer to the official reveal of the 45th Super Sentai series Kikai Sentai Zenkaiger and a plethora of new information about this new series has just been released online!

Zenkaigers’ story begins with a pair of scientists that discovered parallel worlds & could concentrate the powers of these worlds into small devices called Gears. In the process they discovered a world of mechanical lifeforms known as Kikanoids– normally a peaceful people but now their world has been conquered by the Evil Dynasty Tojitendo that seeks to eliminate all other worlds.

The scientists’ son, a young man named Kaito (described as an adventurous friendly man with no sense of personal space) takes up the power of the Gears with another device- the GearTlinger to transform into a new Super Sentai hero- ZenKaiser!

Four of the Kikanoids are able to join Kaito-

*Zyuran– the senior member of the team, who thinks he is calm and relaxed but is in practice a stubborn old man. With the power of the Gears he takes on the combat form ZenkaiZyuran!
*Gaon– a peaceful airhead with a love of cooking, who becomes ZenkaiGaon for fights.
*Vroom– the educated team member with a love for schooling; his battle form is ZenkaiVroom.
*Magine– a shy otaku obsessed with the occult who can transform into ZenkaiMagine when needed.

The Zenkaigers will be aided in their missions by Secchan– a strange talking mechanical bird created by Kaito’s parents.

In addition to changing between humanoid-robo and Zenkaiger forms, the Kikanoids are also able to transform into Mechas! The artwork gives us some ideas of the combinations- a type of SYMMETRICAL DOCKING where one Zenkai Robo forms half the combination.

Kikai Sentai Zenkaiger is currently scheduled for release March 7 2021! Stay tuned to TokuNation as we keep you up to date on this remarkable new chapter in Super Sentai history! 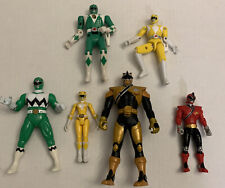