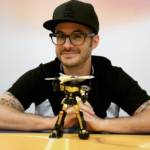 Gregory Mitchell left Bandai America and Power Rangers in October of 2016 to join Alpha Group, a Chinese based company that was in the infant stages of growing their presence in the US markets and territories. Since joining the team, he has played a pivotal part in the acquisition of master toy licenses for various properties, including the multi-billion dollar global property that is Spongebob Squarepants. Fans of tokusatsu will recognize the name Alpha Group as the same company in China that produced the Armor Hero tokusatsu series.

He was kind enough to sit down with us for two hours and discuss a number of topics relating to the Power Rangers brand, both from his time there and from his position now looking at things as an outsider. In our exclusive interview, Gregory discusses how the process of a Super Sentai season becoming a Power Rangers season happens; the inside scoop on Legacy toys quality control issues; Legacy Shogun Megazord; an abandoned Super Sentai series that was planned before Lupinranger vs Patranger; and a handful of stories and favorite memories that you may have missed over the years.

The full interview is available in podcast form from Talkin Toku. You can listen to it in the player below or download it by clicking here.

The entire interview is also uploaded in to 9 total videos on our YouTube Channel. The first piece, a preview we released a couple of weeks ago, is shown here on the front page. All 8 follow up segments are included with this story and can be found by clicking “Read More”.