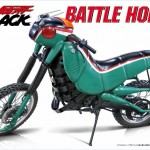 In a bit of a surprise announcement, model car company Fujimi via Taghobby has announced that they’ll be diving into the world of Kamen Rider bikes, starting with Kamen Rider Black’s trusty ride: a 1/12th scale replica of the Battle Hopper!

The model kit will be coming out in October, retailing for 5000 yen and the kit itself will feature compound eyes ala S.H.Figuarts.